Death of Private Cloud: We Know, But Do You?

Recently there has been an uptake in news articles debating the inevitable death of private cloud. One article that I found particularly insightful was ‘The End of Private Cloud – 5 Stages of Loss and Grief.’ John Treadway, SVP at Cloud Technology Partners writes:

“It’s not today, or tomorrow, but sometime in the not too distant future the bulk of the on-premise private cloud market is going to shrivel into a little raisin and die. A very small number of very large companies will operate private clouds that will be, by an large, poor substitutes for the services available in public clouds. However, they will be good enough for these companies for some percentage of their workloads.”

In the article, John looked at the five stages of loss and grief for private clouds. It’s a great read so I highly suggest having a look. For the purposes of this blog, I’m skipping to the fifth stage, acceptance:

“Not everyone will get here. Many have already, coming to the early conclusion that the future is and will be in the public clouds. Those that do get here before everybody else will have more opportunity, more reward, more fulfillment. The late arrivals may have to find other careers – like today’s laid-off mainframe programmer looking for a job at Facebook, it ain’t gonna happen dude. Many a former techie has found fulfillment and happiness in other fields – I even know one who went back to medical school and is a practicing oncologist. Pretty cool, eh? Even Julia Child didn’t start cooking until she was 50 – so your second career is nothing to fear!

In any event, once you understand that the public cloud is the future – and when you are over the denial, anger, bargaining and depression – you can start to make plans.”

I agree with John. The switch to public cloud is happening with increasing momentum. In fact, spending on public IT cloud services will grow five times faster than that for the IT industry as a whole from 2013 to 2017, according to a new report from IDC.

The question I pose is why are we still arguing about private vs. public cloud? A little over a year ago, we published a similar blog from my colleague Alex Bligh ‘Private Cloud is Dead’ which challenged the widespread assumption that private cloud carries a number of advantages over public cloud. We believe that private cloud is merely an attempt to use cloud’s technology without gaining any of the efficiencies.

The elephant in the room here is organizational change. Why are enterprise IT departments still raving about it? Enterprise IT is notoriously slow at adopting technologies used by service providers, and in some instances, by consumers for many years; consider how long for example corporate employees had to put up with VPN based email and calendaring, while the consumer just used his iPhone. The reasons for this are numerous, but include:

There appears to be a particular reluctance on the part of enterprise IT to adopt public cloud technology. IT departments currently control IT spending. Cloud is really a technical vehicle facilitating IT outsourcing; and the CIO has an empire to protect. Some CIOs may throw up all sorts of objections to an external cloud, but each of these objections to public cloud can be dispelled. Read our white paper for five common objectives and why these arguments do not hold weight .

Back to John’s comments on acceptance. We believe those that accept the move to public cloud will instead invest time in finding a service provider that can meet their needs. This might not be the giants in the industry like Amazon, but instead service providers that differentiate based on the needs of the client. These differences could be based on vertical cloud, industry, language, user experience, amongst others. For service providers, this means you need the ability to turn private cloud customers into public cloud consumers of your services. Having the ability to differentiate becomes essential. 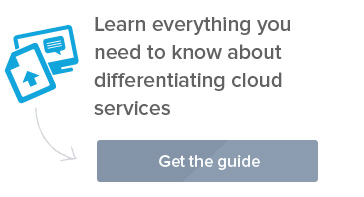